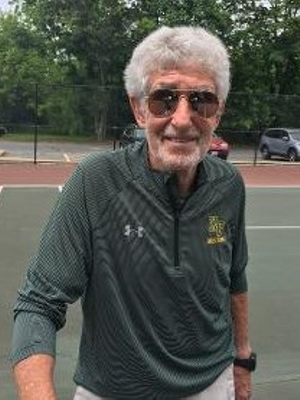 The 2020 girls tennis team at King Philip was unable to reach a dynamic milestone last year by becoming the first squad in the program’s history to win four straight Kelly-Rex Division championships. COVID-19 ended that dream when all sports last spring were canceled, but the long wait to achieve the four-for-four accolade ended last month when coach Bob Goldberg’s current contingent posted an unbeaten 14-0 record.

Goldberg, who’s in his 49th year as the program’s coach and has 756 career victories, felt strongly that the 2020 team likely would have been the first group to achieve that mark because “everyone was back.’’
“You don’t win championships on paper,’’ he said. “You have to play the matches, but the odds of us winning the crown last year were heavily in our favor. We had Erin Regnier back at first singles and Katie Welch and Grace Ely back at first doubles.’’
The 79-year-old Goldberg, however, is delighted this year’s team finished the job and he gives all the credit to a group whose dedication and passion for tennis ruled the day.
“The girls had confidence in their ability,’’ he emphasized. “They got momentum early and rode it to the finish. Our players basically felt they could match up favorably with all opponents. Winning four straight championships is like climbing a mountain and reaching the peak. But, it’s the players who did all the work.’’

An old-time movie, “The Magnificent Seven,’’ could easily be the motto of this year’s champs. The team featured senior co-captains Katarina Schneider and Mia Valencia at first and second singles, respectively. Junior Sammie Taylor played third singles. The first doubles lineup included sophomore Ahunna James and freshman Shea Mellman, and junior Resha Ajoy and senior Amanda van Roon competed at second doubles.
“Katarina had a 14-0 record during the regular season,’’ Goldberg noted. “A left-hander, she puts natural top spin on the ball. She could go to the net and put the volley away. Her serve is consistent and she hits at sharp angles. A finesse player, she hits good placements and she’s a leader by example.’’
Valencia also had a superb record, going 14-0. “Also an excellent leader, Mia hits hard, has a consistent serve and rarely beats herself,’’ Goldberg said. “Another lefty, Mia learned to go to the net more on a short ball. She knows how to move her opponent from side to side.’’
At third singles, Taylor had a 10-1 record and she managed to go 3-0 at second doubles. “The virus cost Sammie a year of experience,’’ Goldberg said. “She probably could have started at second doubles last year as a sophomore. She hits hard, displays good ground strokes, and her serve is effective.’’
James and Mellman at first doubles were 14-0, complementing one another very well.
“Ahunna is an unbelievable volleyer who’s strong on her lobs and serves,’’ Goldberg offered. “Shea is a textbook player, always playing the game the way it should be played. She’s gained confidence and her ground strokes are good. This team improved every match.’’
Ajoy and van Roon rounded out the starting lineup. “Resha listens intensely and follows advice soundly,’’ Goldberg said. “Her placements are very good and she’s always thinking about her next move. She rarely beats herself. Amanda is a very aggressive competitor, a tiger at the net. She’s consistent from the backcourt and at the net she puts the ball away.’’
The Warriors were preparing for the tourney, which got underway after Local Town Pages deadline. The program has been a playoff participant 43 times in Goldberg’s 49 years at the helm.
No matter how far the Warriors advance in the playoffs, the team’s strengths were high-octane assets. “The girls were coachable, committed to the program, had a high tennis IQ and were mentally tough,’’ Goldberg said. “We also relied on experience and had technically sound players.’’
Goldberg, who taught history at the KP Middle School for 39 years, experienced a wide range of emotions when last season was canceled, then re-started this spring. He was disappointed at first, felt upbeat when 2021 spring sports were approved, then fully realized what the key priority was.
“I was down when we couldn’t compete last year,’’ he said. “Then I felt fantastic when I learned in March we’d have a season this year. Happiness returned but, even though as coaches we love to teach and have our players compete, it’s important to realize the main focus should always be on the health and safety of everyone.’’
During his 49 years, Goldberg emphasizes that his coaching career has always been positive. He says disappointments never occurred, even in defeat. “Coaches learn early on that teams win and teams lose,’’ he said. “You have good days and bad days. But, I’ve never felt disappointed.’’
Goldberg, however, can easily point to his top coaching thrill. “From mid-May 2007 to mid-May 2011, we won 61 regular season matches in a row,’’ he recalled. “We got to a point where we felt we wouldn’t lose. At times we banked on adrenaline. I never enter a match thinking we’ll lose. But, we got to a point where we’d face an opponent who had better personnel than us, but somehow we knew we were going to win.’’
The streak ended when KP faced North Attleboro without its second and third singles players who were out because of injury.
Another plus that Goldberg experienced was coaching the Dean College women for nine years. His teams won six junior college titles from 1982 to 1990 — results that earned him a place in the school’s athletic hall of fame.
There’s been some major milestones for the KP girls tennis program. A long winning streak, four straight division crowns and a coach approaching 800 career triumphs.
Bob Goldberg, who goes year to year when deciding if he’ll continue coaching, emphasizes that any glory the program gets belongs to the girls.
As he says: “KP’s success in tennis is because of good players, coachable competitors and excellent team chemistry.’’