By Brendan Zimmerman
Meet Ken DoRosario. He is a Norfolk resident and a music therapist who works with several different school districts and facilities, including the Norfolk Public Schools.
He also happens to be an absolutely electric musician and performer who has helped raise money for local businesses throughout the pandemic with his livestreaming benefit shows, known as the Basement Benefit series.
As a music therapist, he helps children and adults with a variety of special needs. Normally, DoRosario works with students in the classroom or with individuals privately in their homes. During the pandemic, however, he has been doing virtual sessions through Zoom and Google Meet. 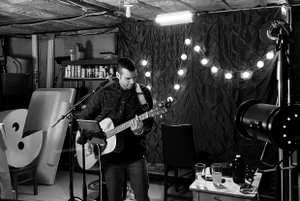 “As a music therapist, I use music as a tool to help individuals work on goals related to communication skills, social skills, self-awareness, fine and gross motor skills, emotional regulation, and relaxation,” said DoRosario.
In addition to being a music therapist, DoRosario has been performing music for most of his life, playing gigs across the state under the performing name Kendo. When the pandemic began and the state initiated its quarantine lockdown, he started doing recorded and livestream performances on social media to try and lift spirits.
Then, he got the idea to start his Basement Benefit series with the help of one of his neighbors. The plan was to host benefit concerts from DoRosario’s basement, and to have the proceeds support local businesses and musicians. The first concert was held on April 3 in 2020, and there have been several more since then. To date, he has raised close to $10,000.
“The outpouring of support both from the local community, and even the wider-reaching Facebook community, has been amazing and heartwarming,” said DoRosario.
Some local businesses that have benefited so far from his series include Cilla’s Coffeehouse, Eagle Brook Saloon, Anne’s Market, Horse ‘n’ Carriage, One Cup Coffee, Organic Buzz Café, and The Gavel.
The benefit concerts are livestreamed through DoRosario’s music Facebook page (facebook.com/KendoAcoustic). Contributions are given through a virtual tip jar, which works via Venmo and PayPal. Viewership has averaged from 2,500 to 5,000 views per show. If you missed any of his shows and want to check them out, they are still available to watch on his Facebook page.
It’s no wonder the livestreams have had such high viewership: his performances are truly great and fun to watch. Livestreams are a difficult venue when it comes to keeping the audience engaged, but DoRosario brings a necessary energy to his performances with his natural musical talent and vibrant playing.
His shows cover a wide range of music. You can hear anything from Oasis to Ed Sheeran, and yes, he does take requests. He performs with just an acoustic-electric guitar and his voice, both of which have a warm, shimmering quality.
The performances open with a general welcome, along with a mention of the businesses that will receive donations from the show. Viewers are able to comment throughout each show, making for an engaging environment that goes beyond the music. Look for the community coming together in these shows to be reminded of the magic of live performances (which this writer has missed for a long, long time).
DoRosario not only plays amazing covers, he was also formerly one of the primary songwriters and the frontman in a Boston-based rock-funk group named Dr. Awkward. Though not as often as he used to, he still finds time to write and compose new music on the side and hopes to record new material in the future.
Music runs through his family. His grandfather used to play several instruments and sing, which had a big impact on DoRosario growing up. He took up guitar at age seven and began singing shortly after. Over the years, he continued to nurture his musical talent in school and beyond, and his passion for it only grew.
“Music has a way of connecting people and bringing them together,” said DoRosario. “During quarantine, when we couldn’t physically be together, the Basement Benefit concerts were one little way for me to feel connected to others, and I think those who tuned in had a similar feeling of connectedness.”
As the state reopens, DoRosario has started to resume live in-person performances at local businesses and establishments. For those interested, his upcoming gigs can be found on his website, KendoAcoustic.com. Moving forward, he hopes that people will show up to support local music as they readjust.
“There is so much great talent in this area and like so many things, I think the past year has taught us not to take these things for granted.”