By Grace Allen
Charlotte Kapilow-Cohen finally came home to Norfolk last month, just in time for her first birthday.
Her homecoming was delayed almost one full year. Originally due on September 4 of last year, Charlotte was born on June 11, 2020 at 1 lb. 9 oz (720 grams), about the weight of six sticks of butter. 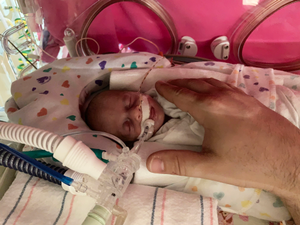 Charlotte at one month.

Her story is a modern-day medical miracle. That a baby so tiny and so medically compromised could survive and eventually thrive outside the womb is due in no small part to the skill and dedication of her care teams and the world-class hospitals that dot our landscape. But Charlotte herself played a role, believes her mother.
“Charlotte is a fighter,” said Amy Kapilow-Cohen. “She has shown us she has the will and determination to keep going.  She’s so tough and so scrappy. She can hold her own.”
Amy developed severe preeclampsia in her second trimester and had to be induced at 27 weeks to save both her life and the baby’s. As a micro preemie, Charlotte faced daunting odds from the beginning. Her fragile, immature lungs meant she needed a ventilator to breath. She developed a brain hemorrhage as well as hydrocephalus and suffered numerous blood infections that turned into sepsis. The doctors at Brigham and Women’s Hospital, where Amy delivered, were worried about meningitis, as well. 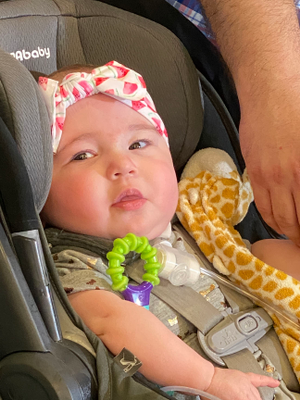 Charlotte at almost one year old.

“It was dire,” said Charlotte’s father, Liam Kapilow-Cohen. “And everything they were doing to keep her alive was bad for her at the same time.”
Miraculously, when Charlotte was 30 days old, the brain bleed stopped on its own. The brain swelling also stopped and started reversing itself.
“The doctors were astonished,” said Liam. “They were almost certain they were going to have to put in a shunt and she was going to need brain surgery.”
Charlotte’s acute lung disease and potential for long-term use of a ventilator, however, meant she would need a tracheostomy. On September 4, her original due date, she was moved to Boston Children’s Hospital where she underwent surgery a few days later to insert the tracheostomy tube that would help her breathe. 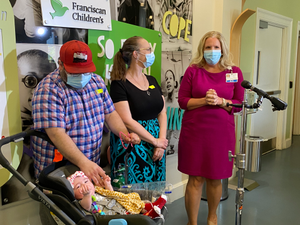 On November 12, Charlotte was big enough and stable enough to transfer to Franciscan Children’s Hospital, which has a pulmonary rehabilitation unit. And in the parking lot, after exiting the ambulance but before entering the hospital, Charlotte finally got to meet her big sister Hannah as well as her maternal grandparents.
At the Franciscan, the doctors were surprisingly optimistic. Despite all the baby’s medical challenges and the myriad of interventions and medicines that could have compromised her sight, her hearing, and her endocrine function, her prognosis looked promising.
“So many things could have been so challenging,” said Amy. “But we knew we would do whatever it took for Charlotte to live the best life that she could live, whatever life that might be for Charlotte.”
The family’s ordeal, difficult enough already, was made worse by the pandemic. COVID precautions meant Liam couldn’t be with Amy when she was hospitalized at the Brigham, depending on which floor or unit she was currently in. When Charlotte was moved to the Franciscan, both parents couldn’t visit at the same time during the early part of the baby’s stay.
Still, Amy and Liam, who moved to Norfolk in 2017, were buoyed by the prayers and well-wishes from people around the world, people they did not even know who had heard about Charlotte. And the Norfolk community rallied around the young family, too, by providing emotional support along with months of meals. An anonymous local business donated Christmas gifts for Charlotte and Hannah, who is 4.
“The community support has been overwhelming and we are so grateful for the love shown us,” said Amy. “I wish we could personally reach out and thank everyone. We are so blessed.”
Amy works in quality assurance at Takeda Pharmaceutical Company. Liam, who lost his job because he was spending so much time at the hospital, will be starting a new job at Intellia Therapeutics in gene manufacturing. Their backgrounds equipped them to cope with the complicated care Charlotte received and also to ask the right questions of the medical staff.
Not every child is so lucky. While Charlotte was at the Franciscan, Amy and Liam learned that the hospital had patients in the foster care system. Many of the children did not have anyone to speak for them or point out issues. Amy found herself on several occasions stepping in to help, and she was eventually asked to sit on the hospital’s parental advisory committee.
“Our experience really opened up our eyes to the world of children with medical complexities,” said Amy. “Advocating for hospitalized children like Charlotte has become something that’s really important to both Liam and I.”
Amy noted that much support is available through the hospital for parents of sick children. Gas, meals, and even rent assistance are just some of the programs for people in need “so they don’t have to go it alone” she said.
Many of those funds come from appreciative families, so in honor of Charlotte’s first birthday, Amy and Liam started a fundraiser for the Franciscan (http://give.FranciscanChildrens.org/Charlotte). At press time, over $21,000 had been raised for the hospital so far.
“We are so grateful to them,” Amy explained. “The way I look at it, the Brigham NICU saved Charlotte’s life. Children’s Hospital stabilized her and helped her grow big enough to get the tracheostomy. The Franciscan, however, is where Charlotte thrived. The doctors and nurses and the respiratory therapists have gone above and beyond. Charlotte wouldn’t be where she is today without them.”
Charlotte’s doctors anticipate a normal childhood for her. The baby’s lungs are getting stronger and she needs the ventilator for only twelve hours a day now. The pulmonologist told Amy and Liam that while Charlotte may never win the Boston Marathon, she will almost certainly be able to run it one day.
“That was huge,” said Amy. “Because we had no idea. For a long time I couldn’t look into the future because I didn’t know what it would be. Every night I would pray, please just let Charlotte survive. But I can picture the future now and it looks so amazing. Charlotte is going to do great things. She is a force to be reckoned with. She’s a little miracle baby.”