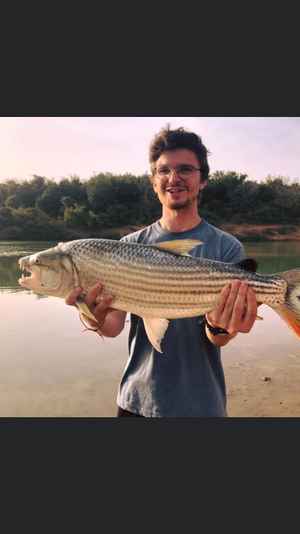 Adam Strubeck with a Tigerfish.

Graduation was looming but Adam Strubeck had not yet decided what he was going to do next.
The University of Miami senior was skeptical yet intrigued when a career center advisor suggested the Peace Corps. The advisor noted that Strubeck had studied environmental science and economics and liked to travel. It seemed to her a good option.
Strubeck applied, somewhat on a lark, and to his surprise was accepted. And so began a life-changing and even historic adventure that the Norfolk native and 2014 King Philip graduate details in his book “Rice and River Fish: A Peace Corps Memoir.”
Laced with dry humor, the book describes Strubeck’s stint in the West African nation of Senegal. In his role as an agroforestry extension agent, he worked with the local population to implement more sustainable agriculture resilient to climate change. Strubeck was also the first Peace Corps volunteer ever to serve in Koulari, his assigned village of 500 people, located in the south near Gambia.
Strubeck and the other volunteers attended three months of cross-cultural training when they arrived in Senegal, which helped prepare them for their experiences in the predominately Islamic country. The training included immersive language lessons. In addition to French, close to 40 different African languages are spoken in Senegal.
“It was definitely tough, trying to adapt to the culture,” said Strubeck during a phone call. “These people have so little yet are so happy and grateful for what they do have. It gave me an appreciation for how lucky we are in the United States.”
Woven throughout the book are descriptions of Senegalese cuisine. Most meals center around fish, plentiful since the country has over 330 miles of coastline. Rice is a primary crop in the semi-arid interior. Strubeck, a self-described picky eater, grew to love the food, which was often eaten communally with his host family from the same bowl.
One of Strubeck’s most memorable experiences was using a fishing rod to catch a Tigerfish for the first time. Villagers in Koulari use nets to catch fish and had never seen a fishing rod before. Koulari is very near the Gambia River, a source of much of the small fish Strubeck ate daily. Tigerfish, however, are big fish, strong, fast, and fierce, with large protruding teeth. They are one of the most sought-after game fish in Africa. The experience of catching the fish left such an indelible impression on Strubeck that the book cover of his memoir includes a Tigerfish drawing.
While in Senegal, Strubeck kept in touch with family and friends as best he could. Cell reception was spotty but he kept a blog to journal many of his experiences. Two friends from home traveled to visit him, and one started a GoFundMe in anticipation of the trip. Strubeck had told him the village needed a new solar pump for a garden. Close to $1,500 was raised and a new pump was installed while the friend was visiting.
Peace Corps stints are normally two years long, but about eighteen months into Strubeck’s commitment, a global pandemic was unfolding. Still, he could mostly ignore the worsening crisis until a COVID-19 case was confirmed in Dakar, the capital and largest city in Senegal.
On March 15, 2020, the Peace Corps made the difficult and unprecedented decision to suspend all operations and immediately evacuate the 7,300 volunteers stationed in 60 countries around the world. The organization did not want its volunteers stranded if travel became impossible.
Strubeck now lives in Hawaii with his girlfriend Amanda, another Peace Corps volunteer he met in Senegal. He currently works for Kupu, a non-profit partnered with AmeriCorps, doing forestry work and introducing native plants to the forest reserves. His memories of Koulari and Senegal will always stay with him he said, and he hopes to return someday. Although his commitment was shortened, he reflects in his memoir about his accomplishments:
“Quantitatively speaking, I had planted a few hundred trees, and with the help of my friend Sam installed a new solar pump. This work was nothing to sneeze at; however, Peace Corps service is much more than the number of projects a volunteer completes. If I had inspired one person to plant more trees, one person to incorporate more sustainable practices, my service had been a success.”
Strubeck self-published “Rice and River Fish” through Amazon. The book is also available on e-readers at the Norfolk Public Library.