By Grace Allen
Norfolk Police now have an official community resource dog. “Mitch,” a golden retriever puppy, joined the force last month at just eight weeks old. He is the department’s first community resource dog.
Mitch lives and works with his handler, Officer Joseph Choiniere, Norfolk’s school resource officer.
“Every day that I am working at the Norfolk Police, he will be with me,” said Officer Joe, as he is known in the schools. “He will be with me inside my cruiser and inside the schools. I go everywhere with him and he goes everywhere with me.”
Mitch’s main job will be to enhance the Police Department’s outreach and engagement efforts with the public. Community resource dogs can make it more comfortable for some people, especially children, to talk to a police officer in uniform.
“We want them to feel comfortable and to be able to approach us,” explained Officer Joe. “A student is more apt to come up to us and pet the dog and then begin speaking with us. It can be a conversation starter and then from there we build a relationship with the student and hopefully they feel comfortable coming up to us whether we have the dog or not.”
Officer Joe noted that Cruiser, Wrentham’s community resource dog, has been instrumental at calming down children in car accidents. He added that the COVID-19 pandemic has caused a lot of worry among children in the schools and believes the new puppy will be helpful at alleviating some of that stress when school starts again next month.
“There was a lot of ‘first day of school jitters’ for these kids,” said the officer, who spends time at both elementary schools as well as the middle school in town. “One day they’re in person, and then the next day back into remote. The lack of routine caused a lot of anxiety. We can bring the dog around and that will hopefully help.”
Mitch is an English cream breed of golden retriever, known for its gentle and patient nature. He was bred and will be trained by Golden Opportunities for Independence, a non-profit in Walpole that pairs service and therapy dogs with individuals, and more recently with area police departments as community resource dogs.
Norfolk’s new puppy will attend training Monday through Thursday at Golden Opportunities for Independence. On Saturdays, Officer Joe will join him. Eventually, Mitch’s training will include socialization practice at community events and at area stores and malls.
The puppy will have to pass several national certification tests, including the Canine Good Citizen Test and the Public Access Test, to ensure his temperament is such that he listens to his handler and can respond appropriately to a student in crisis and can deescalate tense situations.
Mitch was named in honor of Mitchell Forsythe, the son of Bob Forsythe, a reserve police officer with the Norfolk Police Department. Mitchell died from injuries sustained in a motorcycle accident on June 30. He was 20 years old and wanted to become a police officer like his father. The Norfolk Police Department was planning to sponsor him for the police academy when he turned 21. 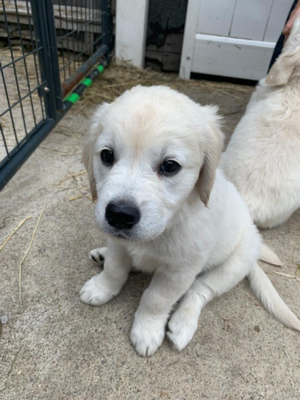 Mitch joined the force at only 8 weeks of age.
(Photo courtesy of Norfolk Police Department.)

The Police Department had asked the community for suggestions on a name for the puppy. But in a July 15 Facebook post, the Police Department wrote, “It suddenly became clear to all of us at NPD what the name of our Community Resource Dog should be. After discussion with the Forsythe family, we have decided to name the Norfolk Community Resource Dog ‘Mitch’ (or occasionally ‘Mitchell’ if he gets into any mischief). We felt this is a fitting tribute to a fine young man who would have continued to spend his life helping others, always treating people with care and compassion, as our Community Resource Dog will do as well.”
Community resource dogs are now in about a dozen towns in the state, courtesy of the Norfolk District Attorney’s Office, which offered a $5,000 grant towards the purchase of the dog. However, the puppy’s training will cost another $15,000, which was raised in a record amount of time, according to Officer Joe.
“We were so fortunate that the Lions Club, Norfolk Recreation, and NCTV reached out to us and said, ‘how can we help?’ They came up huge for us. It was amazing. The whole community helped bring this dog to town with their donations. It would not have been possible without everyone’s help.”
In addition, Babson College Public Safety will be donating Mitch’s food for an entire year. This past winter, the school welcomed its own community resource dog—Roger—and it quickly became obvious how positively the dog had impacted the entire campus.
Fundraising efforts in town will continue to ensure the puppy’s vet bills and other needs are taken care of.