By Ken Hamwey
Staff Sports Writer
The King Philip girls lacrosse team was looking forward to the 2020 season, especially after posting a 14-7 record in 2018 and a 12-8 mark in 2019. The Warriors had qualified for a pair of sectional tourneys and advanced to the second round both times, bowing first to Lincoln-Sudbury then later to Walpole. 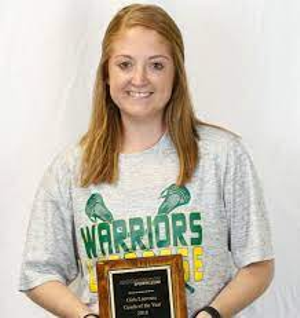 Coach Kourtnie Wilder also was eager to get her third year underway but the COVID-19 pandemic hit and last year’s season was canceled.
“It was devastating,’’ Wilder said. “I was disappointed for the girls, the coaching staff and the program. We had talent, promise and motivation to compete for more success but we never got the opportunity. Now, I’m super excited to be coaching the girls again. It’s been almost two years since they last played a game — when we lost to Walpole in the tourney in 2019.’’
So far, KP is off to an excellent start, posting a 4-0 record at Local Town Pages deadline.
“I’m excited about our strong start,’’ Wilder said. “Our players are dedicated and they’ve displayed a terrific work ethic.’’
Wilder’s goals for the season are to battle for the Kelly-Rex Division title in the Hockomock League and to qualify for the sectionals again. “Franklin and Mansfield are traditionally strong,’’ Wilder emphasized. “Franklin always is a contender for the division crown and although Mansfield has a new coach, it has talent. We’ve got only six returnees with different levels of experience but we’ll battle for a tourney berth and strive to advance as far as possible.’’
The Warriors captains are senior Peyton Mellman and juniors Julia Marsden and Colleen Crowther. “All three lead by example and are great role models for the program,’’ Wilder said. “Julia and Colleen are vocal leaders. Peyton is a great role model for the younger players in the program; Julia leads by example on the field; and Colleen is a great vocal leader.’’

Mellman is a key attacker. “She’s aggressive and tenacious on offense,’’ Wilder said. “Peyton is a dedicated competitor who’s a superb team player with great field vision.’’
Marsden and fellow juniors Lily Brown and Margo Riley will patrol the midfield and be counted on heavily to provide a boost on offense and to manage transition situations.
“Julia was a defender,’’ Wilder said. “She’s an all-around competitor who’s intense, solid in transition and very athletic. Lily played as a freshman as an attacker. She’s crafty, has good hand-eye coordination, can dodge well and is versatile and athletic. Margo has speed, she’s instinctive, is strong in transition and knows the game.’’
Junior Haley Izydorczak can be utilized as a midfielder, defender or attacker. “Haley is so versatile,’’ Wilder said. “She leads by example, no matter where she plays. A pro-active competitor, she’s athletic and knows the game.’’
Crowther gained some experience as a freshman defender. “Colleen relies on her field vision,’’ Wilder noted. “She’s a vocal defender, she’s aggressive and she’s athletic.’’
Wilder emphasized that the players who comprise KP’s nucleus “are all agile, have speed and quickness and have a high lacrosse IQ. “This year’s squad will be defense-minded,’’ she said. “That’s where we have experience but we’ll adjust our focus from game to game.’’
The 28-year-old Wilder, who played lacrosse as a defender at Framingham High and at Assumption College, banks on an athletic philosophy that aims for her players to reach their potential. “I love to see our players reach their potential and to enjoy competing,’’ she said. “If those two things occur, then winning will follow.’’
Wilder, who’s in her sixth year as a biology teacher at the high school, also likes seeing her players learn life lessons from athletics. “Overcoming adversity is a great lesson that can be learned,’’ she said. “Adversity can be an injury or it can be a losing streak. Whatever the hurdle is, it’s important to overcome it.’’
Volleyball Team Co-champs
The Fall 2 season is in the history books for KP and if there was a feel-good story, it was the perseverance displayed by the volleyball squad.
Because of the COVID-19 pandemic, coach Kristen Geuss’ Warriors had to quarantine for 10 days after the team was chosen, and because of contact tracing, four players were unable to compete for the first three matches.
The results after KP’s 10-game schedule against Hockomock League teams were outstanding. The Warriors posted a 9-1 record, their only loss coming against Franklin, which tied KP for the Kelly-Rex Division championship. The Warriors then entered an abbreviated post-season format and finished 2-1, enabling Franklin to win the Hockomock League Cup. The Warriors defeated Oliver Ames (3-0) and Canton (3-1) before bowing to Franklin (3-1).
“We played well in the playoff against Franklin but it wasn’t our best,’’ Geuss said. “Franklin committed fewer mistakes and they’re always a very competitive team. The girls, especially our seven seniors, were upset losing to Franklin but what was more upsetting was the season ending. The seven seniors realized that their KP careers were over.’’
Geuss gives her team a straight ‘A’ for adjusting to the rules and modifications caused by the virus. “The kids were flexible and resilient,’’ she said. “When our team early on was missing players, the seniors stepped up and adapted to a different offense. And, all of our practices were in Foxboro at Mass. Premier Courts.’’

The senior contingent included captains Nicole Coughlan, Lily Carlow, and Emma Brooks, and Lauren Peterson, Paige Kannally, Giovanna Fruci and Camryn Buckley. “The seniors knew they had to carry the team because of the uncertainty of COVID-19,’’ Geuss said. “They persevered, they never gave up, and they worked well together.’’
Junior Stella Bailey and sophomores Ahunna James and Sami Shore were key components in Geuss’ rotation. “They all stepped up, rose to the challenge and played their positions effectively.’’
Four juniors, who’ll play key roles next fall, include Liv Carey, Sam Asprelli, Sofia Riedel and Molly O’Brien. “Each one of these girls could be counted on to compete at any moment,’’ Geuss emphasized.
Geuss, who’s coached KP’s varsity for six years, has guided the team to five tourney berths, the deepest run occurring in 2019 when the Warriors advanced to the Central East Sectional final where it lost, 3-2, to Boston Latin.
Moving to a Fall 2 season turned out to be a good move. State officials allowed volleyball’s format to follow what was learned during the winter campaign that dealt with modifications for basketball and ice hockey.
Geuss is excited about next fall’s season. “We’ll have seven returnees who are skilled competitors, who mesh well and will provide good team chemistry,’’ she said. “I hope things improve for a more normal season but we’ll just have to wait and see. I was just so pleased that we could compete this season.’’