By Ken Hamwey
Staff Sports Writer
The long wait is finally over.
Jeff Plympton’s debut as King Philip’s varsity baseball coach took 21 months but the 28-year-old Wrentham native was delighted to see his squad settle into their positions around the diamond and in the outfield for the Warriors’ season opener at North Attleboro on May 7.
The Warriors didn’t get the result they wanted, and an opening-day triumph wasn’t in the cards for Plympton. But, both he and his players were pleased that spring sports were back on KP’s athletic menu after being canceled last year because of the COVID-19 pandemic.
The Red Rocketeers defeated the Warriors, 4-2, thanks to the pitching of ace right-hander Dennis Colleran, who’ll be on Northeastern University’s roster next spring. Colleran, who’s ranked as one of the state’s top hurlers, held KP to three hits while striking out 11 and walking only one. The fastball pitcher, whose velocity is in the 94 mph range, threw 110 pitches and hit four KP batters. 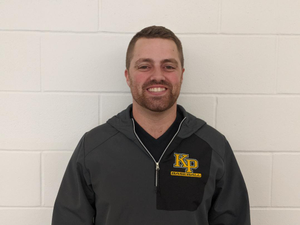 In spite of the setback, Plympton was glad to finally get the season underway and to get his debut in his rear-view mirror.