By Grace Allen
In the past year, a desire for more outdoor space has driven people out of urban areas and into bucolic towns like Wrentham. Preserving Wrentham’s abundant natural resources and scenic beauty is no small task, however. And that’s where the Wrentham Conservation Commission comes in.
The group’s primary goal is to protect Wrentham’s land, water, and biological resources by administering the Wetlands Protection Act. Massachusetts has very restrictive wetlands and environmental codes that apply not only to developers and builders but to homeowners as well. 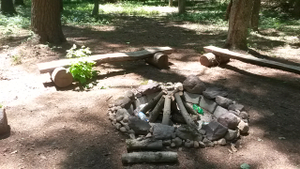 Campground built by a Boy Scout at the Wollomonopoag conservation area. 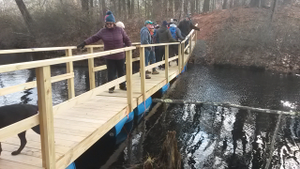 Bridge built by an Eagle Scout candidate at the Wollomonopoag conservation area.

Homeowner Responsibilities
The Wetlands Protection Act regulates activities in or near areas such as swamps, floodplains, streams, and rivers, even on private property. Think of these important areas as transition zones or links between the land and the water, producing a unique ecosystem that contributes to public and private drinking water supplies, wildlife habitats, and fisheries. According to the Environmental Protection Agency, wetlands are among the most biologically productive natural ecosystems in the world.
Wetlands are defined by soils, hydrology, and vegetation, and are not necessarily “wet” year-round. While the presence of plants like skunk cabbage, high bush blueberry, red maples, and some ferns indicate wetlands, depressions that fill with water in the spring but are then dry the rest of the year could also be wetlands.
Homeowners should contact the Conservation Commission before beginning any project that involves altering, filling, or dredging, especially if they suspect wetlands, said Luce. The group’s technical expertise can help determine if there are wetlands on a property and where the buffer zones lie. Buffer zones are critical in maintaining the health of wetlands and can extend as far as 200-feet out from the borders. Any work activity in a buffer zone requires a permit.
“Projects that use machines to move dirt or cut down trees may violate state and federal law if done without a permit,” the Conservation Agent explained. “Violating those laws comes with serious fines and the potential for criminal or civil actions. The saying ‘it’s easier to ask for forgiveness than permission’ could be costly.”
Permits issued by the Conservation Commission will detail how the work is to be done so that the project minimizes harm to wetlands and neighboring properties. The Conservation Commission can also provide valuable advice to homeowners embarking on a project. Members have been trained by the Massachusetts Department of Environmental Protection and attend classes throughout the year.
“The Wrentham Conservation Commission wants to see that your project works for you but doesn’t adversely impact the wetlands or your neighbor,” said Luce.