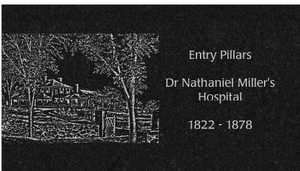 A black granite plaque has been attached to the right entry pillar at Ariana Lane in Norfolk to mark the site of Dr. Nathaniel Miller's Hospital, which was built in 1821.
The entry pillars are the only part of the hospital which survived over the years. When Dimartino Construction of Franklin bought the site, Mr. Dimartino recognized the historic significance of the pillars. He carefully removed and refurbished them and put them back to mark the entry to his development. 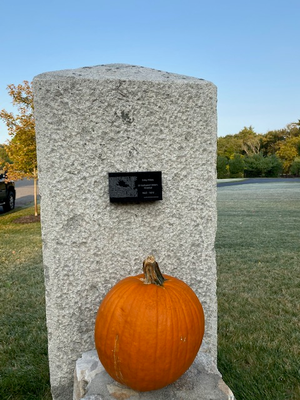 The plaque is attached to the right entry pillar on Ariana Lane.
Dr. Miller made his home next door to the hospital, at the corner of Miller and Myrtle Streets. His former home still stands today.
That area of Norfolk, known as City Mills, was part of Franklin until 1870. It then became part of Norfolk, which was incorporated as a town that year. The hospital was destroyed by fire in 1878.